As promised earlier, following are pictures of the four kittens we currently are adopting and fostering. We plan to adopt Pepe and Milo. The other two we are fostering at this point — the jury is still out as to whether they will also be adopted. (Four kittens is one thing, but four cats — oh my!!!) The females sure are trying to win over our hearts!

Pepe is the most independent of the four. He doesn’t mind finding a cozy area and relaxing while the other kittens are playing. He seems to be in control at all times. He’s got very large paws, and we call him the “gentle giant”. He is already becoming quite a lap cat.

Milo is small but mighty. He seems to be the most athletic and has no problem jumping across, up or over in order to get where he wants to go. He is a joy to watch!

Here are the sweet females. The names are our attempt to keep them a little distance away from our hearts. The fact that we’ve been thinking of more permanent names may be telling — not sure yet.

There will be much more on these kittens in coming weeks!

Since I mentioned the kittens in my launch post, I’ll give a few details today. We have been caring for four kittens, all from the same litter and born on May 2, for the last two weeks. Two of them we plan to adopt, and the other two we are fostering. Their mother’s name is Misty. She was rescued from a kill shelter. All the kittens are beautiful (aren’t all kittens beautiful?) and so different, both in markings and personalities. The lucky future adoptees are Pepe and Milo, who both happen to be the males. As for the foster female kittens, we have temporarily named the fuzzy white one No. 1 and the spotted one No. 2. It is way too easy to get attached to these little creatures. Those names at least makes things slightly more impersonal. I’m not sure it is working though. The kittens’ sweet faces will be revealed in future posts. 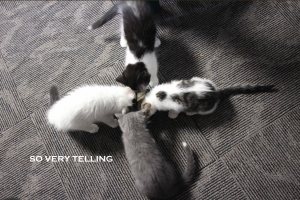